A running joke on Unwritten Passage is that everything that can go wrong will, but we console ourselves that at least everything that can go right will also happen. Although some of us have been making games for years, there has been a learning curve involved in making a game as part of a successful Kickstarter. On the one hand this gives great freedom. On the other, it requires tremendous foresight, and you find yourself locked in to inevitable over-commitments made in early planning due to promises made to backers. This of course has been a challenge, but it has also been one of Unwritten Passage‘s greatest strengths, because it has forced us to continually make creative compromises while keeping our eyes firmly fixed on goals that don’t move. We have been fortunate that in every case, these compromises have made the game cooler and more interesting to work on.

Even our shadow puppet style was born out of compromise

Case in point: rival clan leaders. Back in February we did a lot of exploration on how “story bouts” were going to play and look. These mini encounters represent your clan and a rival tribe swapping stories in order to share your histories and to potentially make an alliance. Although the concepts were promising, we had major concerns about communicating feedback to the player about how the “bout” was going. We mocked up some rough stuff using the shadow puppets from our “story events”, but although we could certainly convey someone shaking a stick in the air, it was difficult to describe an emotion that way. Was he shaking a stick out of anger? Excitement? Because his arm fell asleep? The player just wasn’t getting good feedback about how their choices were being interpreted by the game. 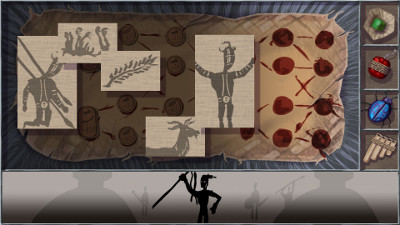 Meanwhile, we had another problem on the back-burner. One of our backer rewards for Kickstarter was the opportunity for them to get their face in the game as one of our shadow puppets. This seemed a natural addition since we needed as much variety as we could get. However, it was important to us that this not be something that seemed weird or out of place. We wanted to use the backer’s face in the actual game (not just as a vanity addition for the person that made the pledge), but putting human faces on our puppets wasn’t working out. As we progressed it turned out that keeping the story event puppets abstract-looking had the best visual impact, and our attempts to put our own tiny faces on the puppets ended up looking silly.

This last month an epiphany produced the solution to both our backer issue and the story bout problem. We decided that our rival clan leaders should have their own unique look, and that they should be focused on conveying emotion to the player. This meant that they would be a single giant face (with a tiny dangling body). This also meant that our backers’ faces were going to be the tribal leaders, and that we now had this great big space to exaggerate features and make things gel with the world as a whole. 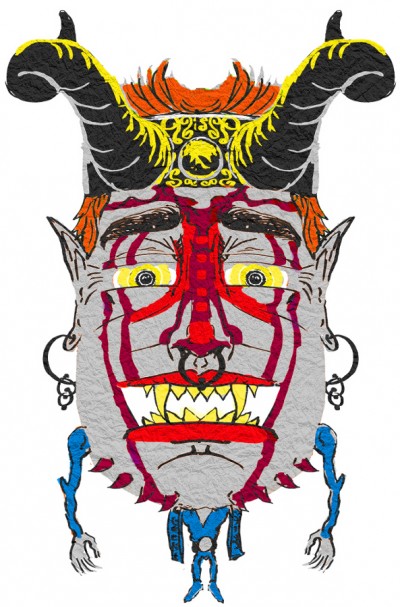 Then add the fantasy!

Interestingly, another compromise here led to some interesting visual dynamics. We first approached the leader faces completely in silhouette (like the puppets in our story events), but we struggled with recreating likeness, conveying emotion, and rigging and animating a face with the necessary moving parts to work as a shadow puppet. We had to articulate huge sections of the face to make sure light would “shine through” in the right spots, and things were getting out of hand. However, once again the history of Balinese shadow theater came to our rescue with some needed inspiration. Balinese shadow puppets, despite being seen in silhouette, are also hand painted and intricately tooled, meaning they tell a different story when on the shadow stage and when viewed in “real life”.

An “off stage” Balinese shadow puppet

That gave us the idea that we’re currently going with: allow the clan leaders to be hand painted, paper puppets, but allow them to nominally function as shadow puppets for dramatic effect.

Unwritten Passage is full of anecdotes like this, and retelling them helps remind us about what is so great to be doing something like this. As always we are hugely grateful to the support of our families and crowdfunding backers. And remember that you can continue to support the development of our weird game.