Those that are following our progress will notice that we’re settling into a monthly update schedule. This is no coincidence since this is roughly how we look at the project as well. A month is usually how long we bring in a new contributor for, and our work goals end up falling into a similar rhythm. These mini milestones are also when we look back and figure out if we had a successful month. Usually the answer is “yes” with a “but”. However, today we can unequivocally say that April kicked ass.

Big strides were made in programming and art direction, and a major part of that success was our collaboration with art director Kim Passey.

Kim’s a fantastic artist in his own right, but for Unwritten Passage his more than 20 years of experience really helped us bring cohesion and focus to the killer ideas that Lee (our principle artist) brought to the table. Kim’s influence was also instrumental in exploring the themes we already had. For example, in one case he was able to take our original environment concept piece from the Kickstarter (supplied by Waking Mars artist Amanda Williams) and illustrate with a rough color shift how we could make a barren environment still seem alive. 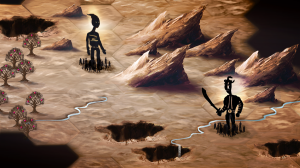 Tools and technology continue to progress, with much of our foundation work coming to a close. Thanks in large part to the smooth progress of the art direction, Joe was also able to make early strides in other areas, including a cloth simulation for the ribbons and banners we see playing a big role in the look of the game.

Moving forward the team’s big focus is on our “vertical slice” and a proper gameplay trailer to coincide with a Steam Greenlight campaign. As long as we keep having months like April, this will be happening toward the end of June and will put us well on the way to our first beta.

As always we’re strengthened by the continued support of family, friends, and our many crowdfunding backers. Independent game development is not always easy, but it’s a tremendous privilege that we’re all intensely grateful for.