Note: although most posts are written from the whole team’s perspective, once again the following post was written by Joe alone due to his personal connection to the events of the past month.

Three years ago in October my daughter was born three months premature by emergency c-section. What relevance does this have to our ongoing project? Not long ago I would have thought, “not much”; however, this month our family was unexpectedly revisited by complications from that difficult time in our past. Although I can’t go into specifics, not to worry: all involved are on the road to a full recovery, with special thanks going out to those that are in our wonderful support network of friends and family. It probably goes without saying that my attention was split mightily from the project, and obviously Unwritten Passage has yet again failed to meet the beta deadline we set out for it.

A positive side effect of all this is that the past weeks have caused me to re-prioritize and re-evaluate, both in my personal life and on this project. The “easy” update to post here is “understandable delay, see you next month”. However, although we certainly can’t be held responsible for predicting a future of personal misfortunes, it’s safe to say that three delays in a row (emergency or not) show that the project just isn’t really in the “imminent release” phase. As a professional game developer on larger projects I’ve seen this kind of pattern before, usually in so called “crunch culture”. How long have I worked overtime on a project with “just two weeks left”? Months in some cases. Deadlines move and move, but the end result is a game 6 months late that feels like it was cobbled together in, fittingly, two weeks.

After taking an outside look at the project, I am more excited than ever to see Unwritten Passage realize its potential. I feel a responsibility to the project, not just because of our commitment to our backers, but also because of how so many people I talk to react to this game. This is why I’ve decided to make some changes to how we’re developing the project, to ensure that we get where we need to go.

Much of these changes are totally internal to the project (changing up some roles, finding creative ways to delegate work, etc). However, a big change is that I’m setting the beta release date as “to be determined”, giving us the time to respond to unseen challenges as they show themselves. Essentially I’m slowing down the frantic pace we’ve been trying to maintain (and failing at amidst all the instability in indie life). Again, not to worry: the project is still focused and is as committed to completing as ever. There are many reasons to change our scheduling strategy, and making this decision involved taking a hard look at our current state in order to make some tough calls. Check out the rest of the update if you’d like a peek at the good and bad of where the project is at right now, but otherwise we’ll see you all again next month for the usual dev update.

This last month, in an effort to get an objective look at the project, I brought a developer friend into the code-base to look around. A bit to my surprise, his initial reaction was glowing over the state of our tools and underlying technology. Outside opinions are so important in this way, since after so much work and compromise we tend to only see the things we have yet to do.

Our decision to create our own technology has always centered around our commitment to give the tools away with the game, something that just wouldn’t have been possible in the same way if we had used an “off the shelf” engine package. Looking back over what we have, it’s very clear that our tools are going to add value not just for the mod community that we hope springs up around Unwritten Passage, but for budding game makers everywhere. For example: we have fully featured tools for rigging together complex 2D sprites and then animating them from start to finish. Since our game “component” files have a simple text format, any project that is capable of writing a text parser will have access to a game-ready animation tool that is essentially free. 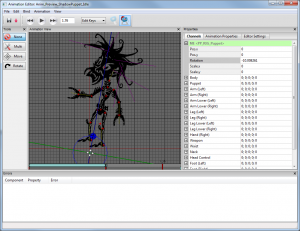 Tools and engine tech are just one aspect of the infrastructure needed when making a game, but Unwritten Passage is similarly strong in other places. Our game has a unique art style and quirky design, which makes those elements hard to figure out because of how “new” they are. However, at this stage we’ve arrived at designs for the various elements of the game and not just in concept. We’ve translated each visual component into actual game assets and have proved that we can deliver on what we saw in the concept art.

Similarly our latest version of the game has all the elements in place in a skeletal form, we’ve identified all the cuts and changes that need making, and we can feel “the fun” inside the game. In this sense, Unwritten Passage truly is “about to be”: the hardest work, constructing a solid foundation, is finally finished.

Despite this strong position we’re developing from, the project is also what I would consider unstable for the actual people working on it. I like to give credit to the successes of the project to Roxlou Games (the company), as it’s a more convenient way to talk about the team, friends, and family that contribute so much in little ways that I couldn’t possibly keep track of. However, from a practical perspective, Unwritten Passage is my baby. I fill literally dozens of roles on the project, and while I find success much of the time, being a bottleneck does come at a cost.

When one aspect of the game or design is floundering I have to steal time from some other role. The biggest problem here has been in “production”, i.e. my role in scheduling, assigning tasks, and following up with contributors. Because of months of minor personal catastrophe (for all the team members) the production schedule has been in ruins. This means that I’ve been creating new strategies and task lists every few days, trying to hit increasingly aggressive deadlines. And one cost is that when it comes time for me to design, write, and program the game (and in a schedule that is tight enough that I’m not afforded any mistakes) I find that I’ve spent most of my time and energy solving other people’s problems.

Why We’re Slowing the Project Down to Speed it Up

Because production bottleneck is our primary problem, there are a few ways to get the project where it needs to go. The most obvious is to delegate more: find some people to help lighten my load. Here is where we hit a problem related to the nature of indie game development: our budget really doesn’t allow us to take on any help at a fair price beyond the few regular team members we have. Although we have friends that might contribute for little to zero compensation up front, that comes at the cost of long deadlines and inconsistent commitments (people squeezing in work between the stuff that pays their rent).

The other possibility is to do what we’ve decided to do and make our time frame more open ended. Not only does this gives our production schedule time to absorb all the bumps in the road and stabilize, but it also allows us to take on those extra indie helpers that can’t help us make a two week deadline, but might help us make a two month deadline.

On a personal note, one of my major moral values in life is one of honesty, and I believe strongly in bringing that to my work as well. Looking at each project, gauging where I honestly believe it’s at, and then reacting to the situation is something I find vitally important. Although this exposes the weaknesses in the project, it’s this process that increases my confidence rather than diminishes it. I also think that this value is something I need to pass on to the backers, the people that are putting their faith in me and my team members. I’m often counseled by friends to hold more back in updates, but when in doubt I will still relay the realities of this crazy journey, deferring to my faith in all of you.

You have to give trust in order to get it in return. I’m only sorry that it has to comes at the cost of long, boring-ass updates.