Note: although most posts are written from the whole team’s perspective, the following post was written by Joe alone due to his personal connection to the events of the past month.

This, our usual monthly update, comes a bit later than usual. This is in part because the close of July was also the catalyst for a hailstorm of new beginnings, and we’ve been scrambling to keep our footing amid the chaos.

Many of the “not so pleasant” surprises this month can be traced back to me, most notably a construction project in my apartment complex that slipped its target date and caused my whole family to spend weeks as yuppie nomads sheltering in a miniature shanty town of poorly labeled boxes. 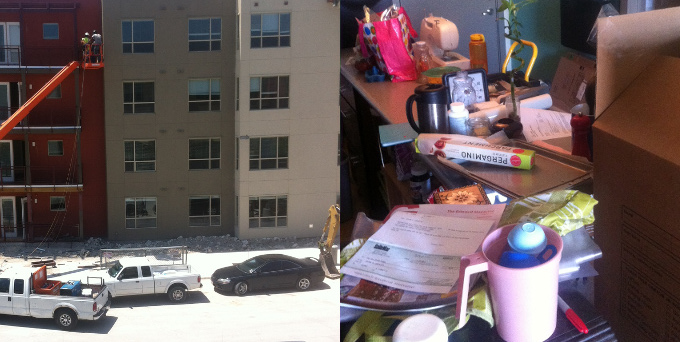 Not shown: any semblance of sanity

This experience ultimately climaxed in the spectacular failure of our only car, which sounded and looked a bit like a jackhammer slamming into a Christmas tree of dire warning lights. Naturally this happened at a time when we were still paying off the tire blowout, a holdover from a simpler, bygone time.

My arch nemesis, and one hazard of many

The thing is, this kind of thing is typical in “the indie life”. For every month that we’ve been working on this project, each of us could regale anyone that cared to listen with tales of life on the edge. Going out on your own away from a big employer is a harrying, life-changing experience, and there is this feeling sometimes that society proper is trying to smother you in tribulation like a white blood cell on a virus. Pretty much every day you stand over the wreckage of your prior, well-laid plans and ask yourself “well is this the end of everything now?”

However, this also means that personal catastrophe is basically mundane, so as a team we tend not to bother people with it. But it does bear mentioning this month, because all this happened at the exact moment we decided that it was time to “crunch” and put in overtime to hit our deadlines in September and October. This is a pretty tough situation when you work exclusively out of a home office (now in ruins), and your budget is too slim to rent proper office space.

As usual, we can thank the unending support of our friends and family for the solution that kept our momentum going. Today’s salvation came in the form of a tiny, stand-alone guesthouse that was offered to us rent-free.

With only a bit of work (and less than $100 of extra hardware) Lee and I were soon situated in what I can only describe as the most ideal work environment I could have hoped for.

Developing fashionable hunchbacks for the amusement of our fans

This also marks the first time that Lee and I have been able to work in the same room together, without the latency of email and video conference. So far results have been immediate and striking. This brings me again to a theme that I feel I keep hammering on, but that I just can’t ignore: this is yet another case where our limitations (and what seems like calamity) end up producing a creative solution that is far better than anything that I would have planned for on my own. We see this all the time in the design of the game (and it continues to assert itself during crunch), but this was one of the first times it manifested so physically.

Lately I’ve been watching “The Long Way Round” on Hulu, a reality show that chronicles Ewan McGregor and his best friend circumnavigating the globe on motorcycles. I felt a certain kinship to their progress across “The Road of Bones” in Siberia, when McGregor talks about being forced to overcome seemingly impassable obstacles. Seeing as how they’re in the middle of Siberia, they approach each problem without the option of failure, asking only “how are we going to do this?” And because of this, they do so much more than they thought they could.

That said, they also overturn a car in Mongolia and nearly lose the life of a crewman in a river crossing (it’s a great show by the way), so there is a definite sense that we are strengthened by adversity but balance that against real limitations. You can do anything… or maybe you’re gonna die.

In a similar way I remain conflicted about the lessons that Unwritten Passage is teaching me as a developer. I hear often that you work best “with the wolf at the door”, and certainly I see some aspect of that every single day. The creativity in economy is convincing me that this is the way to live your life. It’s inspiring. At the same time, I do wish that the wolves at the door didn’t also have knives and sub machine guns, and if we get a bigger budget next time I’m not giving it back. I will however be sure to always do more with less, and approach each obstacle by only asking “how will we do it this time?”

Thanks, as always, for your support.

behind the scenes crunch That Which Happened Unwritten Passage update