As game developers, we find that our Twitter feeds read like a news ticker for “what’s happening in women’s rights”. The game industry, not unlike an adolescent teenager riddled with acne, is going through a lot of changes and is gradually seeing girls in a new special way. Only instead of finding that the mousy tomboy Sandra from next door now makes his palms sweat and his knees tremble, the industry is discovering that women as creators and consumers might actually be a part of a multi-billion dollar entertainment market. Of course this comes with growing pains and embarrassing, involuntary emissions, as evidenced by the most recent brouhaha over transgender comments made by Gabe of Penny Arcade. What this also shows though, is that these early explorations of women and games are really a gateway to the larger issue: gender and games.

Gender in our game, Unwritten Passage, has followed a similar path. We also started by focusing on the role of women in the game, with things really coming to a head this month as we began to scale up our designs for our shadow puppets.

Technically we were finding representing men and women to be a challenge, because our “mix and match” approach to randomizing the puppet pieces still mostly limited us to putting male pieces on male characters and female pieces on female characters. It soon became apparent that by dividing the sexes we weren’t going to be able to fit the right number of pieces into memory. But we also just couldn’t have a story-telling world where women weren’t represented.

As is so often the case with controversy, the Penny Arcade dust-up became a blessing, both to the community at large (because of the conversations it started), and to us and our shadow puppets. In Unwritten Passage the shadow puppets represent what the people in the clan use to talk about themselves in legendary fashion, meaning that not only are they allowed to diverge from the “real” people in the tribe, but they must diverge. This has been evident from our earliest concept work: make tiny nuclear families on the battlefield, but make epic, weird spirit creatures in the story realm.

This is when the PA controversy brought a moment of clarity. We were wrong to focus on women and men in this case: often times men could prefer to tell stories of their identity with female avatars, and similarly women with male ones (as many MMO player rosters can attest to). This is classic story telling, and historically gender in story telling is hardly fixed. For example, representations of the Hindu God Shiva in ancient times routinely had both male and female elements.

Careful, guided randomization is a big part of Unwritten Passage, but in gender we’ve been inspired to let go a little and give randomization freer reign. We now mix our male and female puppet pieces freely, redesigning them to represent epic, spirit guides that may have both male and female elements but still represent a cohesive whole. 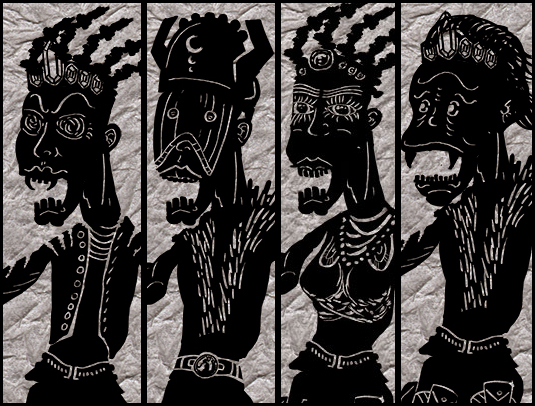 We’re also taking gender randomization a step further by randomizing the sex of each character in our narrative “story events”. For example, in the video for our successful Kickstarter we had a sample story event where the player’s tribe encounters a man with his son, starving for food. The player is given several options, including the chance to give the food, but only in exchange for the son as a slave (which the man agrees to). With the latest change whether you encounter a man and his daughter, a woman and her son, a woman and her daughter (etc), is completely random. So far the result has been fascinating as each scenario is changed radically based on the player’s own beliefs. Do they feel differently about a woman trading a male son for food than a man trading his daughter for example?

It’s an interesting exploration, but one we’re not completely finished feeling out. As Joe mentioned in his RPS article on game violence, giving extra freedoms to the player doesn’t free us of our obligation to provide context to the outcomes. Since each decision has actual gameplay consequences we have more to decide. Do we make the world as gender blind as the algorithm that creates the story events, meaning that other tribes will weigh the life of a man and woman the same? Do we try to anticipate and mirror the preconceptions that many of our future players will have? Do we project our own sense of what we believe to be right and wrong?

Regardless of where we eventually end up, we’re excited about this new direction. It feels like both our fictional and real worlds are opening up and getting a whole lot weirder (as an Austin based company we mean this in the best possible way). The future is a fertile ground for story telling, conversation, and making games.

Thanks, as always, for your support.